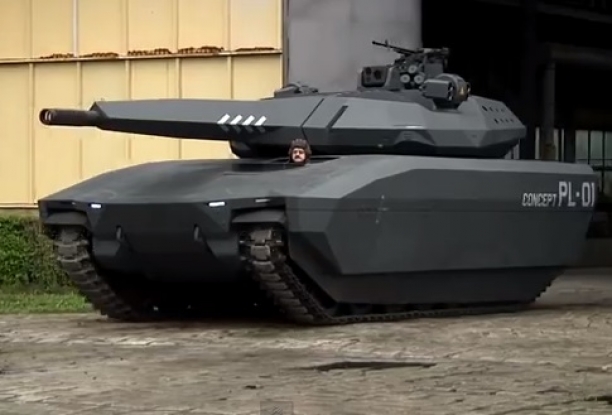 Category: Tanks
Tank PL-01 idea invented by Polish businesses and a large English company. The tank has a unique look and can be completely changed around to fit the user's preference.

Tank and men
The tank is not a heavy construction that has a goal of fighting other vehicles in combat. The PL-01 lets 3 crew to be seated inside the vehicle, which allows for more armor against outside threats like explosives and mines. It has a new age, ceramic armor that has many different layers.

New hybrid
The tank will use steel or rubber tracks to move along the ground, with a drive that is powered by an engine that is a hybrid. The vehicle can drive at fast speeds wherever it pleases. It can easily go through water as well.

Lots of firing options
The tower has modules, and it allows for a mount that has an auto ammo feed system located on the backside of the tower. It also has a machine gun and a selection of weapons that can be controlled by remote, plus a larger calibre rifle and a grenade launcher.

It is both ready to fight at night and during the day. It lets the drivers observe enemies during the day and night. There will also be an auto detection system for missiles and for partnered forces. Everything will be connected to one system which will be the head behind the guns.

This is one of the most powerful tanks out there. The Polish tank PL-01 will begin being manufactured near 2020.
Our Content Protected by Copyscape