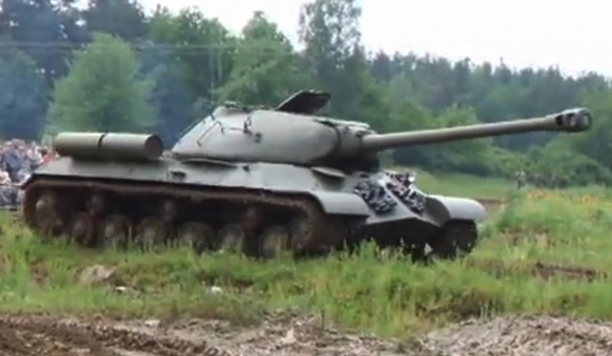 Category: Tanks
The IS-3 or the Iosef Stalin (Joseph Stalin) IS3 was part of a series of tanks that served Soviet Army during the WWII. The whole series was based upon the KV tanks and began with the IS-1 that was produced in the year 1943. The IS-2 came next during the very same year. The IS-2 came fitted with the 122, main gun - a lethal weapon indeed. The IS-3 was developed afterwards because the Soviets were convinced of its value.

The IS-3 modifications were a re-design of the whole series. For instance, the armor protection of the IS-3 is the best of the lot. This tank has better turret armor protection than its predecessors and is thus a safer machine to operate overall. The armor of the whole series was already a stand out. There were other modifications made on the turret. It was well-rounded and there was more space for the turret crew. Additional projectiles were also given ample space. For better protection from ballistics, the glacis plate had increased slope. The combined modifications on the turret and hull resulted in a lowered silhouette. This made the tank more difficult to track and target from any given angle.

The chief armament of the IS-3 was the 122mm (121.9mm). This was infamous during the war for its excellent penetration capacity and the flexibility that came with it. Expert crew can let off from 2-3 rounds every minute. The projectile choices were expanded as well to include 10 AP or armor-piercing rounds. In addition, there were 18 HE or high-explosive fragmentation. The IS-3 was capable of facilitating battlefield targets.

In October, 1944 the IS-3 prototype was designated as "Object 703." After a very short while and a series of evaluations this was approved for production. Factories in the Soviet Union capable of constructing heavy vehicles were soon busy with construction. The very first operational IS-3 tanks were entered into the inventory of the Soviet Red Army on May, 1945. The IS-3 appeared in the victory parade through the city of Berlin on 7th of September, however, it did not see much action at the front because the war in Europe was mostly over. Adolf Hitler had taken his life and the German capital has fallen under the control of the Soviet Army. Only a few pockets of the German war machine were still continuing the fight, so not much left to deal with.

But it was different in the Pacific because the Soviets were still fighting against Japan. It was said that an IS-3 regiment was deployed in August 1945 in the Far East (mission unknown). By the end of that month the Japanese empire would surrender signaling the end of the war in the Pacific and WWII.

At the time that the Second World War ended, the IS-3 was the most advanced war vehicle of its kind. The Soviets continued producing the IS-3 until mid-1946. About 2,311 units were completed. All the IS-3s in existence were inventoried by the Red Army. The tanks were in the Soviet stockades (it's allies as well) during the years of the Cold War. Even the Western powers had their eye on the IS-3 especially because this tank was a key influence in Soviet tank design in the twenty years that followed.

The IS-3 has a distinctively stout, low-set profile with a curved turret. Somehow its appearance recalls that of an upside-down frying pan. The rifled barrel is long with muzzle break that is double-baffled. The side track on either side has 6 road wheels. The drive sprocket is aft with 3 track return rollers and the idler is held in forward position. The rear compartment is where the V2-IS engine is located while the turret is forward. The heavy chassis was powered by the 520 horsepower engine capable of a top speed of 25 mph. Its range is 115 miles. The IS-3 weighs about 45.77 tons, was 32 feet, 4 inches long and eight feet high. It can be operated by four personnel.

The entire tank body was protected by 20mm - 230mm thick armor which would make it nine inches at the thickest areas. Aside from the armor, the IS-3 was equipped with the D-25T series main gun (121.9mm) and was formidable indeed. Enemy forces loathed attacking it from the front. Its primary weapons were 28 rounds of projectiles (122mm). The secondary armament was a 12.7mm anti-aircraft machine gun which carried 250 rounds. The IS-3 also had one to two 7.62mm anti-infantry machine guns which carried 756 rounds.

The IS-3's design was a step forward in a number of areas. However, it was still beset with mechanical problems much like other heavy tanks of that size. With regard to its operational abilities, the power pack was very unreliable. The transmission systems and engine were both prone to failure. These defects as well as a few matters concerning the hull were possibly due to the speed by which the Soviets pushed for its design & production. It is therefore not surprising that quality control problems would arise. Because of these limitations, a set of upgrades were done, intended to improve certain areas. Some of the improvements made were on the clutch mechanism, road wheels, and new radio equipment. The improvements added to the total weight of the tank by four tons and this additional burden hampered the IS-3's performance a bit.

The Red Army made good use of the IS-3 from the late 1940s until well into the '50s. During the Cold war, the tank underwent a modernization scheme that helped maintain its relevance. After all, its initial design was meant for the World War 2 stage and the Cold War was very different. A number of modern thoroughbreds eventually succeeded the IS-3 and this formidable war machine was soon retired to the history books. Nevertheless, before her time was ended, the IS-3 served a few foreign armies. Egypt was known to favor the IS-3 and even showcased the tank on parades as seen in 1956. The Israeli military captured a few units and these were reconstituted for use of the IDF. The IDF retrofitted the IS-3 with engines from the T54 tanks. The modification improved the performance level for the IDF and gave it a more modern feel. After China's part in the Korean War, this Communist nation also received IS-3 deliveries. The IS-3 was also used as a trainer for new Soviet tanker models before it was taken to storage. The Soviets maintained the IS-3's designation as the most dominant tank in the whole world. Few war vehicles could dispute this distinction.
Our Content Protected by Copyscape