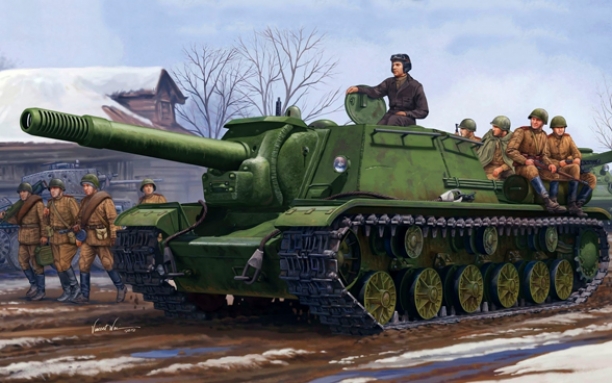 Category: Tanks
The ISU-152 self-propelled multirole assault gun was used by the Soviet military forces in the WWII and afterwards till the '70s. It was armored, fully enclosed, self-propelled and served three main purposes in battle. It played a role in a direct fire on fortified attack positions and as a direct weapon against tanks.

The 152.4 mm ISU-152 was used as a heavy tank destroyer, self-propelled artillery weapon, and as a primary assault gun. The ammunition used varied from 48.78 kg shell capable of piercing armor to a 43.56 kg high explosive shell. The heaviest ammunition used with the ISU-152 was the 56 kg shell long rage ammunition 53-G-54 which could even pierce concrete. Given its capabilities it was utilized for both tank and infantry support.
Our Content Protected by Copyscape