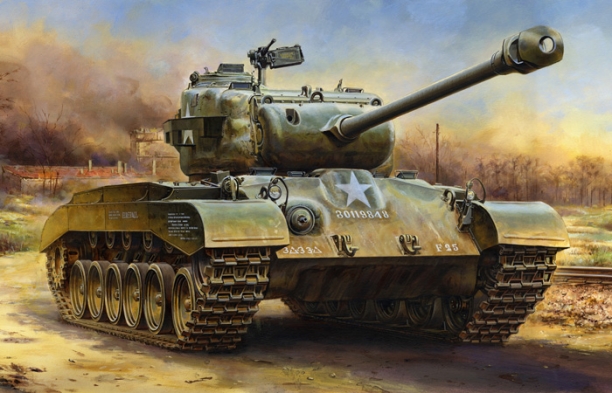 Category: Tanks
Chiefly the Pershing tank was used by the U.S. Military during the Second World War. It was originally developed and considered as heavy tank T26 but after the war this was reclassified as medium, M26. The tank was named after General John J. Pershing who was the commander of the American Expeditionary Force in Europe during World War I. The Pershing was also used in the last stage of World War I and in Korean War. The M26 Pershing tank was the evolution of M4 Sherman. It was rarely seen in fighting scene but the most remarkable fight was in the Bridge at Remagen when it was used by the 9th Armored Division. In its strategic aspects in combating and fighting compared with M4 Sherman it was good defense weapon against the enemies against both the Tiger II and panther tanks. Even though, the M26 Pershing tank was not mechanically consistent and strong, it was superior match with T-34-85. It was obvious when it was pulled out in 1951 during the Korean War and replaced with more developed and upgraded container M46 Patton which has more powerful and reliable engine that can climb on mountainous terrain and move speedily on rocky roads. The innovation and improvement of M26 was continued with the M47 Patton followed by new design M48 Patton and M60 Combat Tank.
Our Content Protected by Copyscape