I Knew Dogs Were Used In Military, But This? I Have No Words For What They Are Capable Of. 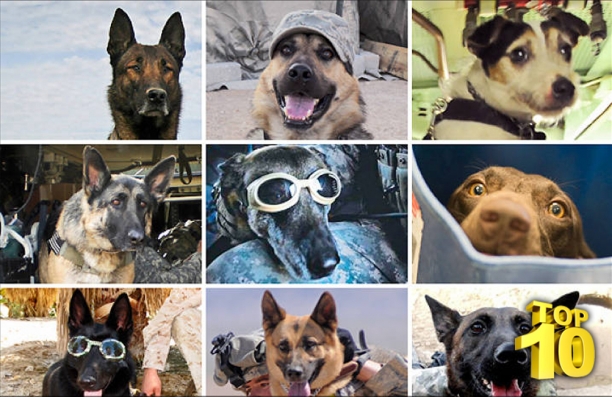 Category: Military
In the United States military forces, war dogs are associated with the troops and they take significant part in the war game. The SEAL Team Six and the most popular "Soldier Dog" named Cairo were commissioned to capture or kill Osama Bin Laden way back in 2011. In the operation, Cairo used his dog senses and canine skills to accomplish the mission of killing Bin Laden. This Dog was effective aid in the triumph of the operation. Other military dogs are used as sniffing dogs to discover threats (similar to what you see at the airports), some are guards and companions of the military troops, some are used for search and rescue operations. The war dogs are also used to guide and lead the soldiers in dark and treacherous places. Closeness and faithfulness are developed between the handlers and trainers. They are genuine lovers of dogs and with their beloved friends, they are an indispensable members of the military.

According to Maria Goodavage, author of the new book "Soldier Dogs", dogs' extreme sensitivities and alertness make them great in the battlefield. She added that dog's sense of smell is stronger and greater than human thus they can recognize if danger and fear are at hand much more effectively. Dogs are more vigilant than we are and they are always ready to attack. There is inseparable relationship between trained dog and his military master as they often sleep and eat together, moreover play together. Greatness of military dogs is achieved by the patience and compassion of their handlers. Dog is man's best friend and a great companion and protector in times of danger and war.

The training of dogs, especially the Belgian Malinois dogs, is usually conducted in Lackland Air Force Base in San Antonio. Texas. Training is tough and tiresome for both the handlers and the canines during the preparation for the battlefield or a special mission. The course also includes lessons and training for the development of extreme physical tolerance and mental readiness. Trainers at Lackland are also required to know basic commands in different languages. Some smaller dogs like the tiny Jack Russell terrier "Lars J274" are also included in the Navy services. These dogs are great in sniffing bombs in submarines. Breeding and training of military or war dogs are customary practice in Germany and Netherlands.

After the accomplishment of the mission or when the war is over, the military dogs are brought back to the United States and oftentimes are adopted by their handlers which bring them home to their families. However, during Vietnam era, war dogs were treated harshly and the poor dogs were abandoned and even erased after the service. Unfortunately, today dogs are still treated only as tools and instruments in the war instead of co members of the team. In 2012, bipartisan Canine Members of the Armed Forces Act presently proposes its way through both houses of Congress to have clear and definite plan for the retirement, adoption, care and appreciation of military working dogs.
Here Is I Knew Dogs Were Used In Military, But This? I Have No Words For What They Are Capable Of.
Our Content Protected by Copyscape