How To Make Your Daughter's Graduation Unforgettable 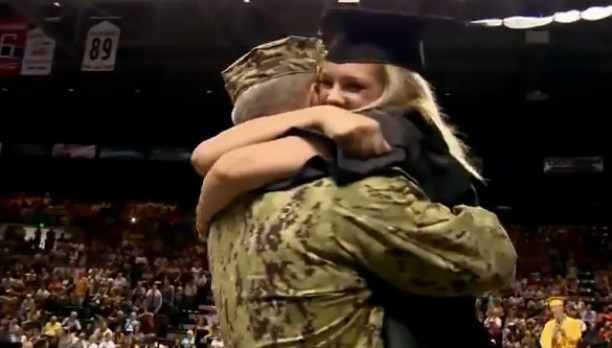 Category: Military
The graduation ceremony at Thompson Valley High School on Saturday is bound to be very special for one of the graduates. From behind the curtain a uniformed individual peaked out, but remained hidden. This uniformed gentleman who came the night before was Tim Miller, a Navy Chief Petty Officer. Miller has been stationed in the Persian Gulf for 7 months, but he wanted to be present in his daughter's high school graduation at the Budweiser Events Center, so he requested for a short leave. He said that he left Dubai at nine in the morning the day before and made it just in time to see his girl.

He was stationed on one of the small boats that guard the Persian Gulf. The boats were mandated to protect the bigger ships. Obviously, he was very happy to be given permission to come home for his daughter's graduation ceremony. On the stage he told his surprised but overjoyed daughter, Megan that he loved her and this emotional reunion was just the beginning of a really good day for the Miller family.

Miller and his daughter were eventually joined by other family members who witnessed the reunion of father and daughter from the audience.

Miller is expected for debriefing at Rhode Island for three weeks, but afterward he can come home in June for good. The proud father can then take his daughter off to college. Megan will be going to the University of South Alabama where she'll be part of the volleyball varsity squad.
Our Content Protected by Copyscape

What will Barrett Sniper Rifle do to an iPhone s5