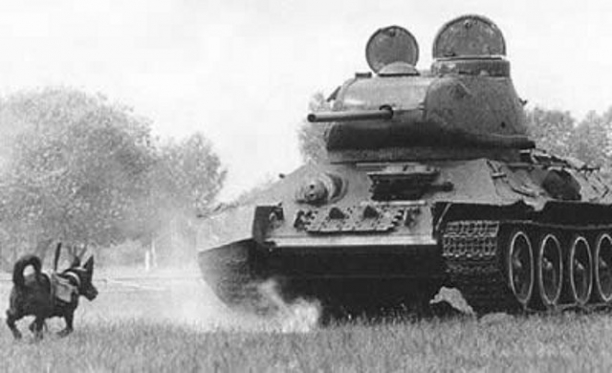 Category: Tanks
Bomb dogs, anti-tank dogs used by the Russian Red Army were true victims because of desperation. The Russians were overwhelmed by the Eastern Front from the German Wehrmacht so they had trained dogs to carry bombs to specific targets. Once they released the device from their teeth the dogs should have gone back to their operator. This was nearly impossible to get them to do this and in the end they just blew up the dog when they reached their target.

The average bomb the dogs carried were 26 pounds that was strapped onto them. They were kept deliberately hungry all the time. This made the dogs run to targets thinking they would be fed, totally unaware of their deadly fate. When the dog dived under a tank a lever that was attached to their rig would cause the bomb to detonate on contact. Because it was so effective, Germans began to shoot all dogs on sight out of paranoia. Thought undocumented, there were an estimated 300 German tanks destroyed and over 40,000 dogs used by the Soviets for different Army tasks.
Our Content Protected by Copyscape