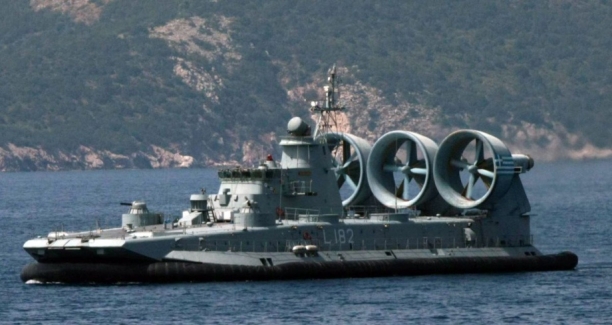 Category: Military
In Russia, sunbathers were surprised when a hovercraft interrupted a peaceful day at the beach. Hundreds of people became first hand eyewitnesses to the unexpected landing of a 60-meter military hovercraft. The beach was packed with beach-goers, sunbathers and tourists when without a warning the hovercraft approached. There were no injuries but it was reported that the people were afterwards surrounded by Russian military paratroopers.

This air-cushioned landing military craft is the Soviet-designed Zubr-class, which is the biggest hovercraft in the world as of 2012. Currently, there are nine active and operational hovercrafts of this kind in the world. It can plant and transport mines and it can sea-lift tanks or marines (assault units) from both non-equipped and equipped vessels to the shore. The hovercraft is being used by the Greek Navy, The Ukrainian Navy and the Russian Navy.

Here are the specifications of the Zubr hovercraft:

Here's the video of that incident:
Our Content Protected by Copyscape