A Hero's Welcome In A Super Bowl's Fashion 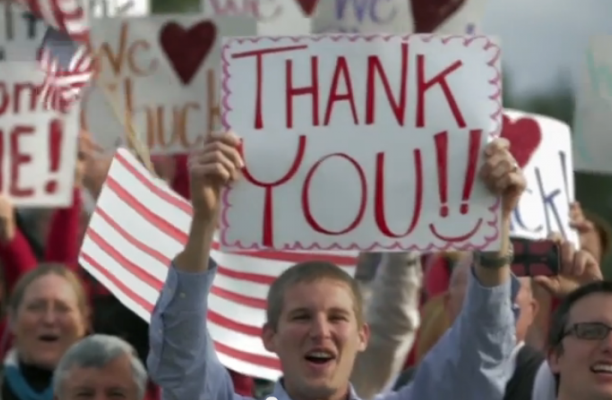 Category: Military
There is another Super Bowl ad that has touched our hearts, thanks to the beer company that has already sent us reeling. The ad entitled, "A Hero's Welcome," is all about Lt. Chuck Nadd, a 24-year old United States Army serviceman who has just come home from Afghanistan.

This 60 second ad is rather simple. The plot is mainly about the homecoming welcome that the Lieutenant's hometown threw to surprise him. The party scenes were set to P. Diddy and Skylar Grey's fitting hit track, "Coming Home."

According to the Washington Post, Lt. Nadd was an operations officer and Black Hawk helicopter pilot. The cameras that were following him were, in his belief, related to a documentary that was being made about soldiers. He also thought they would record him making a speech later at an event to be held at Winter Park, Fl. He was sent home one week and a half earlier that he was supposed to go, so he thought that the event was the reason for the early leave.

At the airport, Lt. Nadd was welcomed home by Shannon Cantwell, his girlfriend. Cantwell was in Washington D.C. When Lt. Nadd arrived at Winter Park, he was in for the surprise of his life. He was greeted by hundreds of people including his family members, friends, neighbors, and former teachers. There was even a parade in his honor graced by the Clydesdale horses, the famous Budweiser icons. At the end of the ad, Lt. Nadd and his mother who came all the way from Alabama can be seen hugging.

Another Budweiser ad tugged at our hearts earlier in the week with "Puppy Love." This one is about a dog that was separated from its home. The ad was released previously this week.

Evidently, the beer company has opted to trigger heart-tugging emotions as the theme for its Super Bowl related marketing.

Do you have anything to add to this story? If so, leave a comment.
Our Content Protected by Copyscape