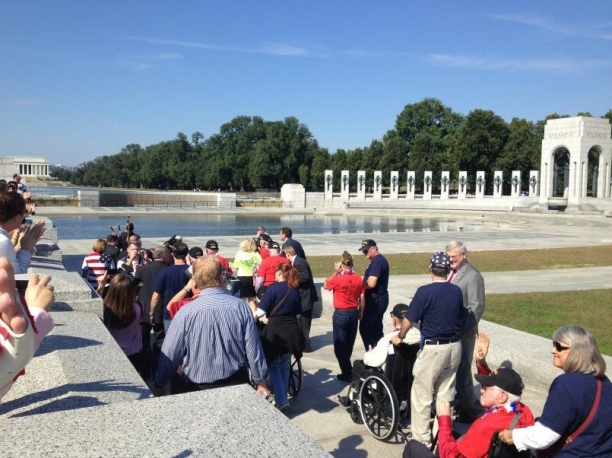 Category: Military
There's a reason why they're called the Greatest Generation!

A group of veterans visiting Washington, DC during the government shutdown didn't very much like the fact that police were blocking them from seeing the WWII Memorial. Instead of listening they just marched past the police officers on the scene and enjoyed their visit. The government shut down closed down all the other memorials, but this couldn't keep out the ninety one veterans who came from the South to see their memorial.

Reporters said that the veterans took over the memorial and the police couldn't really do anything to stop them in this non-violent protest.

There were even tweets from a news agency about how the vets had knocked down the barriers and entered the memorial.

The Honor Flight Network was responsible for bringing the veterans to the National Mall, as they bring vets from all over the country. But of course it wasn't just the vets that were sad when they found out that the National Mall was closed. A forty-four year old woman from Iowa was also interviewed about the memorials being closed, and she was as confused about it as the veterans were.

Think of all the tourists which fly thousands of miles and line up at these memorials every single day. That must really suck.
Our Content Protected by Copyscape

This Song Will Give You Goosebumps