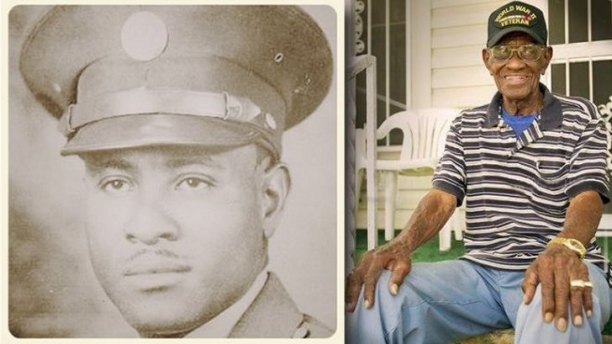 Category: Military
Richard Arvine Overton is known to be the oldest American Army Veteran and he is already 107 years old. After World War II he returned and built his home in Austin, Texas.
During World War II between 1942 and 1945, Overton was deployed in the South Pacific.

His secret of long and healthy life was credited to his dynamic and vibrant activities and daily dose of baby aspirin. Being constantly active physically, undergoing regular mental exercisse and alertness are the factors of his longevity as he disclosed during his recognition for his service by the mayor of Austin,Texas, Lee Leffingwell .

He emphasized that continuous workouts and a little amount of whisky a day helps him maintain his good health and fitness. He explained that whisky is a good medicine for the retention of good muscles and bones.

His comrades and colleagues he has knonw over the decades either perished in the battlefield or died naturally after the war. He is preparing to have retreat in the home he built in Texas after the World War II nn this very especial day.

This is the only thing he wanted.

Mr. Overton, you rock.
Our Content Protected by Copyscape

The Police Serves it to Kanye West with Style

This Marine Found Baby Rabbits and What he did...